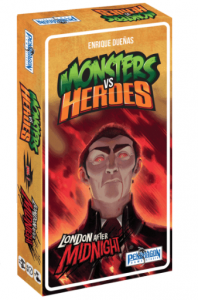 Each player takes a secret faction card: Heroes or Monsters. During the game, a player can either play a card from his hand or draw a new card. Each card will give you “black” points (if you are a Monster) or “white” points (if you are a Hero). Also, each card represents a character with a special skill that you can use in your favor. Dracula can control the forces of darkness. Van Helsing can destroy the undead. Frankestein’s monster can run havoc.

The game ends when the last card is drawn . Then, each player reveals his faction and count his points.

Heroes vs Monsters is very easy to learn and very fun to play. There is a total of 18 different characters in a deck of 30 cards. Some of these characters are unique and deadly, but others are more common and less powerful. In addition to this, each faction card will give you an extra point if you have a certain character in front of you at the end of the game. That means that some cards are more useful for some players than the others.

HOW TO PLAY MONSTERS VS HEROES 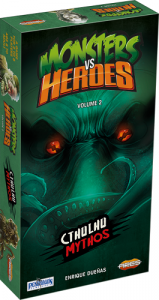 This is the second release in the series after Victorian Nightmare. In this box you will find two new decks related to the Lovercraftian novels: At the Mountain of Madness and Shadows over Innsmouth.

Includes rules to customize your deck!

Monsters vs Heroes – Cthulhu Mytos is illustrated by Riccardo Crosa.

Monsters vs Heroes is published in ENGLISH by Ares Games. You can have more information from these links:
– Vol.1 – Victorian Nightmares
– Vol. 2 – Cthulhu Mythos

Monsters vs Heroes is published in SPANISH by GenXGames. You can have more information from these links:
– Vol. 1 – Victorian Nightmares
– Vol. 2 – Cthulhu Mythos

Szörnyek Hősök ellen – Viktoriánus Rémálmok is published soon in HUNGARIAN by Delta Vision. You can have more information from this Link.

Mostri vs Eroi is published in ITALIAN by Pendragon Game Studio. You can have more information from this link